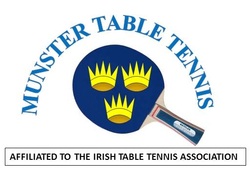 The STIGA Munster Open was held in the INEC/Gleneagle Complex in Killarney over the weekend of 18th-20th January. A total of sixteen tournaments in Junior and Senior categories makes this one of the biggest tournaments in Irish Table Tennis.


This year over two hundred players entered across all age groups, and almost nine hundred matches were played over the three days.


There were a few junior representatives from Tralee Table Tennis Club, but this year no silverware made its way back to Tralee! Maybe next year!


The highlight of the weekend was the Senior Singles finals on Saturday evening, watched by a large crowd.


Hannah Lynch-Dawson beat Sarah Timlin in the Senior Ladies' Singles (and made the final of the Girl's Under-17s the following day.