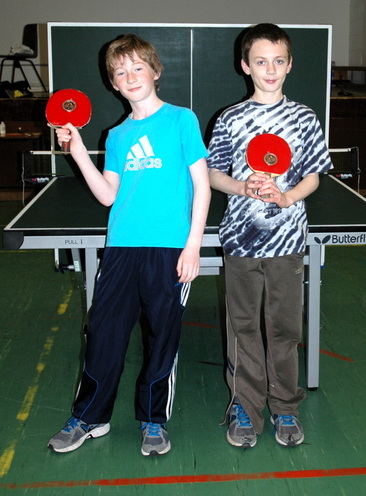 Paul Browne (3rd) and Liam Magee (4th) after their success in the Under-10 competiton. 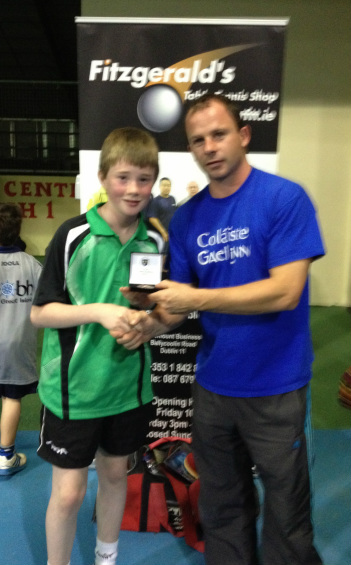 The first Munster Ranking tournament of the season was hosted by the new Leeside Table Tennis Club in the Sports Village in Cork on Saturday, 22nd September. A great venue with lots of room for players and spectators alike, there was an awful lot of table tennis played here yesterday! As well as the Junior events, there was a full programme of senior competiton in the evening.


There were 14 players from Tralee, only the home club had a bigger representation! (Fifteen if you count me!) It was another good day for the club, with our senior players showing just how far we have come in a short few years and a few players who hadn't been to a Ranking tournament before doing very well also. Kevin and Paul Browne both equalled our best ever results, taking third in their respective age groups. Liam Magee also took home a medal in the U-10s! His older brother Ronan did not disappoint either, successfully reaching the knockout stages after a great win in the group stages.


Some of our best players moved up to U-17 this year, a big leap from the U-14 level. But again there were great performances, most of them getting through the group stages. All of the U-17 players stayed on after the Junior tournament to enter the Senior events for the first time. They all got to play in the Banded Senior event, the first time there has been such a competition. And all entered the slightly-chaotic U-21 event, with Alan Hobbart playing superbly after the sun had gone down to come 3rd and almost take a set off James Herley, one of Munster's top young players. He was second in his group of the Div. 2 Mens' Singles as well, including an easy 3-0 win against his "coach". The pupil has now become the teacher!


It was a very long day, after midnight before some of the players got home, but everyone got lots of games and the new Banded Seniors event may well provide an outlet for senior players who have not felt they were good enough to enter the senior events before. The Munster Branch are committed to promoting this event, so hopefully there will be similar competitions at future ranking events.


Well done to all the players and thanks to Sheila, Bridget, Mary and Ger who travelled up to ferry and support our players. And also a special thanks to all the Tralee players who umpired more than their fair share of matches without (well, almost without!) any complaining. It can be very difficult for the organisers of tournaments to get players to umpire matches, especially when players have finished and want to go home, and it makes it much easier when kids step up to the plate to umpire when asked. It is a very important part of tournaments. Yesterday was difficult when unforeseen circumstances meant that there were no scoreboards for the early part of the day, and great credit was due to young players from all clubs who managed well despite this.


The next Munster Ranking tournament is scheduled for the first weekend in November.