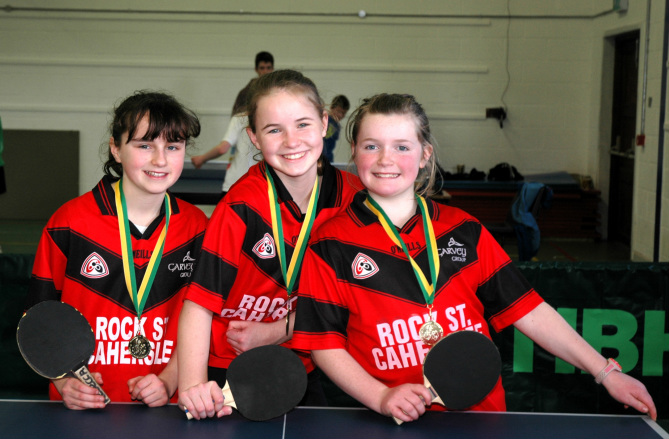 Rachel Ryan, Molly O'Carroll and Emma Reidy: U-13 Girls' Community Games Kerry Champions.
Kerry Finals
(Under-13)
Sunday, 27th January, 2013
Tralee Table Tennis Club was the venue for the Kerry Finals of the Community Games Under-13. There is no Under-16 event this year, so our National Champions can't defend their title!

However, there is an abundance of young talent in Rock Street/Caherslee, and this was proven today with wins in both Girls’ and Boys’ finals.

There were only two teams in the Girls’ competition so it was a straight winner-takes-all final between the girls from Rock Street/Caherslee and Knocknagoshel. The match was very tightly-fought, and it was only the tie-break Doubles match that separated the two teams at the end, with the Rock St./Caherslee girls (Molly O’Carroll, Rachel Ryan and Emma Reidy) winning on a 4-3 scoreline. They will go on to represent Kerry in the Munster Finals to be held in Tralee over the Easter weekend.

There was a much bigger entry in the Boys’ event, with six teams this year, two from Tralee and others from Killarney South, Knocknagoshel, Abbeydorney/Kilflynn and Blennerville/Ballyard. The boys from Knocknagoshel and Blennerville were eliminated after the Pool stages, a lack of match-practice working against them.

That left Abbeydorney/Kilflynn to take on St. Brendan’s/Oak Park ((last year's Under-13 County runners-up) in the Third place play-off between the runners-up of the two first round Pools. It was the Tralee team that took home the bronze medals, with a 4-2 win including a very tight final singles' match which Abbeydorney lost narrowly (13-11 in the fifth game!) to miss out on a tie-breaker Doubles match.

The final was contested between Killarney South, winners of Pool A, and Rock St./Caherslee, who topped Pool B. Both were unbeaten in the Pool stages, and worthy contestants in the final.

Home advantage was enough for the Tralee side to take the Kerry County title for the second year in a row on a 5-1 scoreline. The Rock Street/Caherslee team included Darragh Boyd and Donagh McMahon who represented Munster in the National Finals last year, and this year Paul Browne replaced his older brother Kevin to complete the team. As well as Nykyta Puotkalis, who is fast making a name for himself on the Munster circuit, Killarney South are able to call on the services of Atsuki Ota (who is only nine!) and Patrick Buckley, so this time next year don't be at all surprised to see them contesting the final again! Nykyta had a good win over Donagh, but met an in-form Darragh Boyd in the last match and was unable to break him down, leaving Rock St./Caherslee comfortable winners in the end.

A special thanks to Stephen & Kevin Browne, who as well as supporting their younger team-mates, helped out with the umpiring, coaching and tidying up! 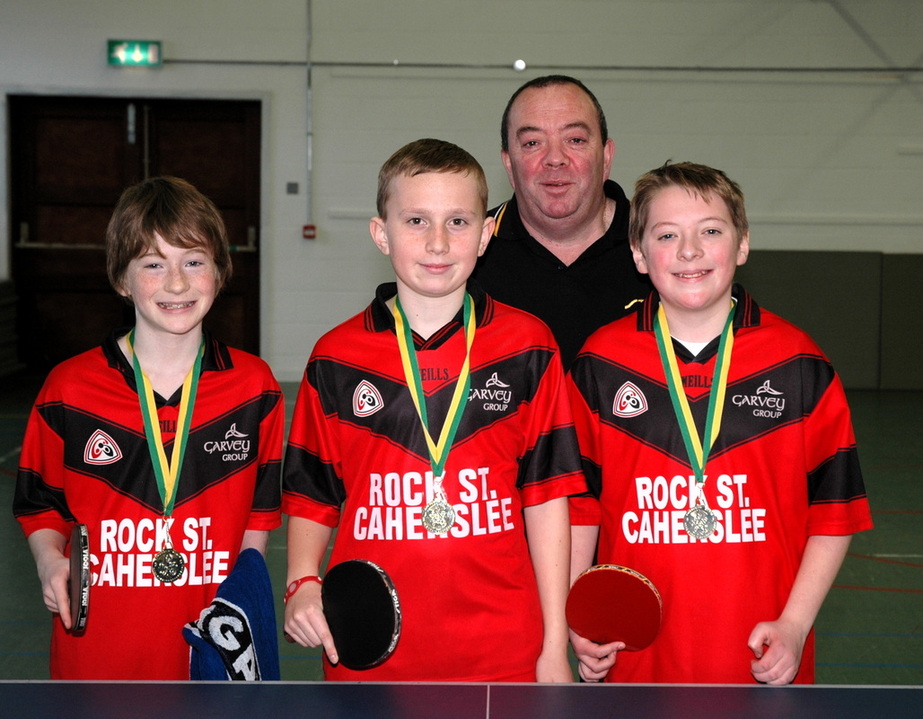 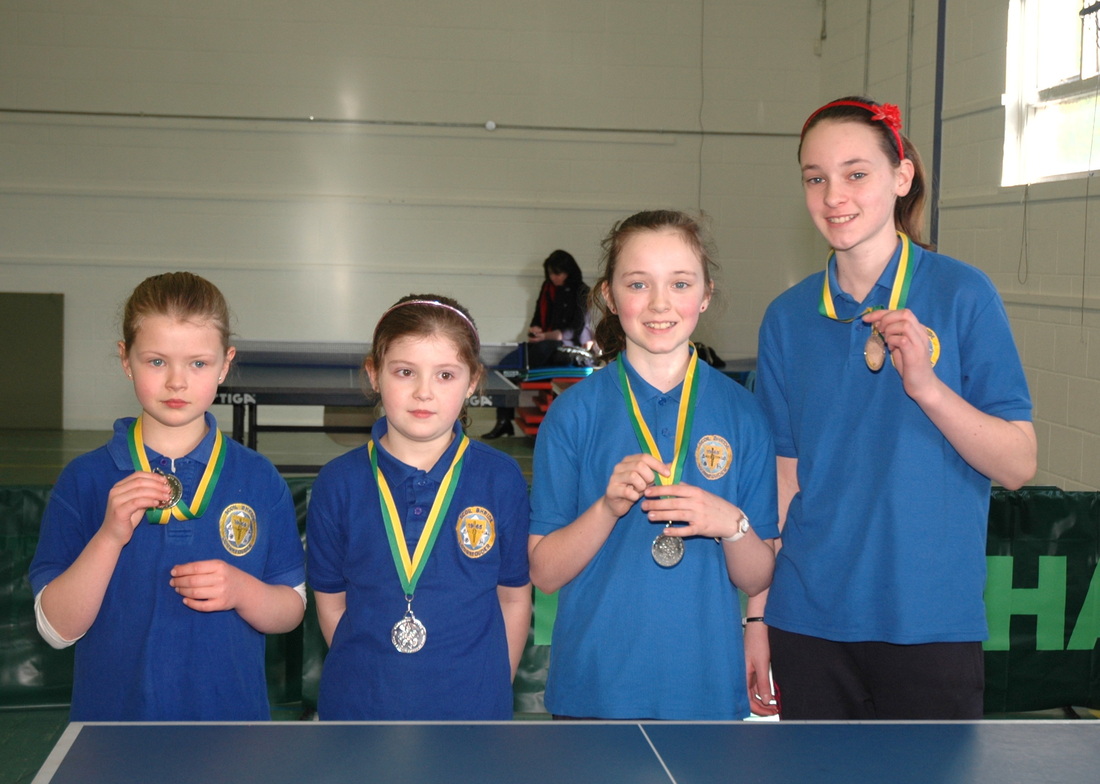 The Under-13 Girls' team from Knocknagoshel, who lost out in a very tight final to take the Silver Medals (Roisín Brosnan, Niamh Brosnan, Erina Cotter & Bronagh Browne). 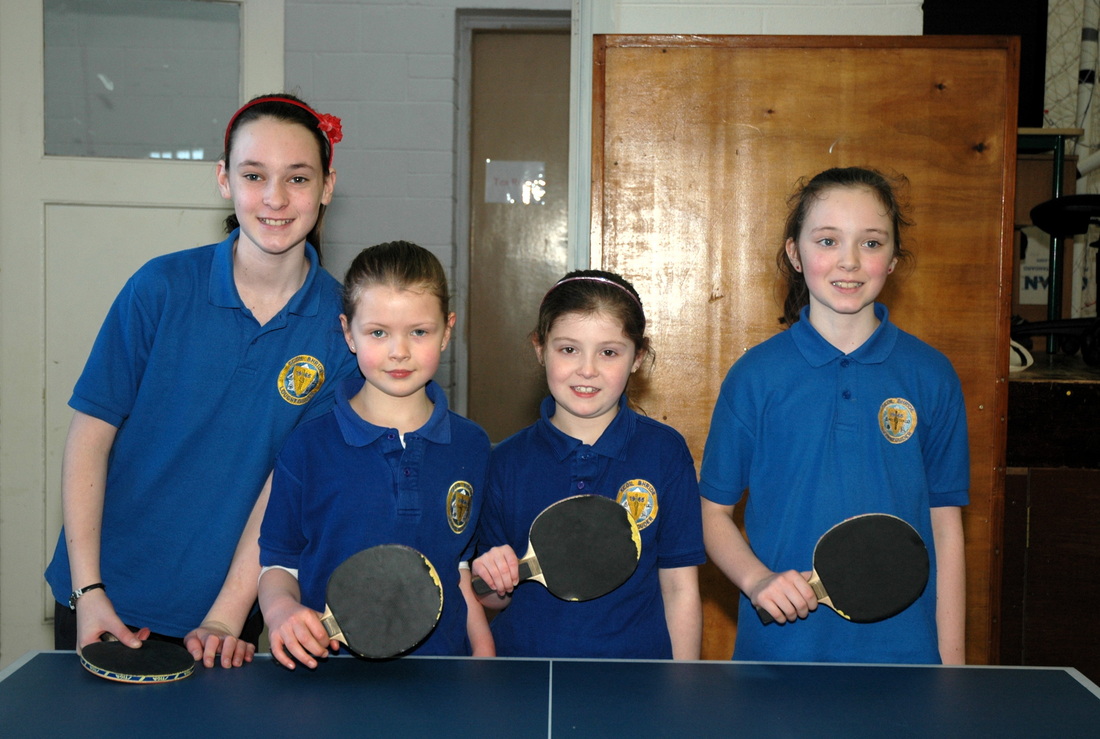 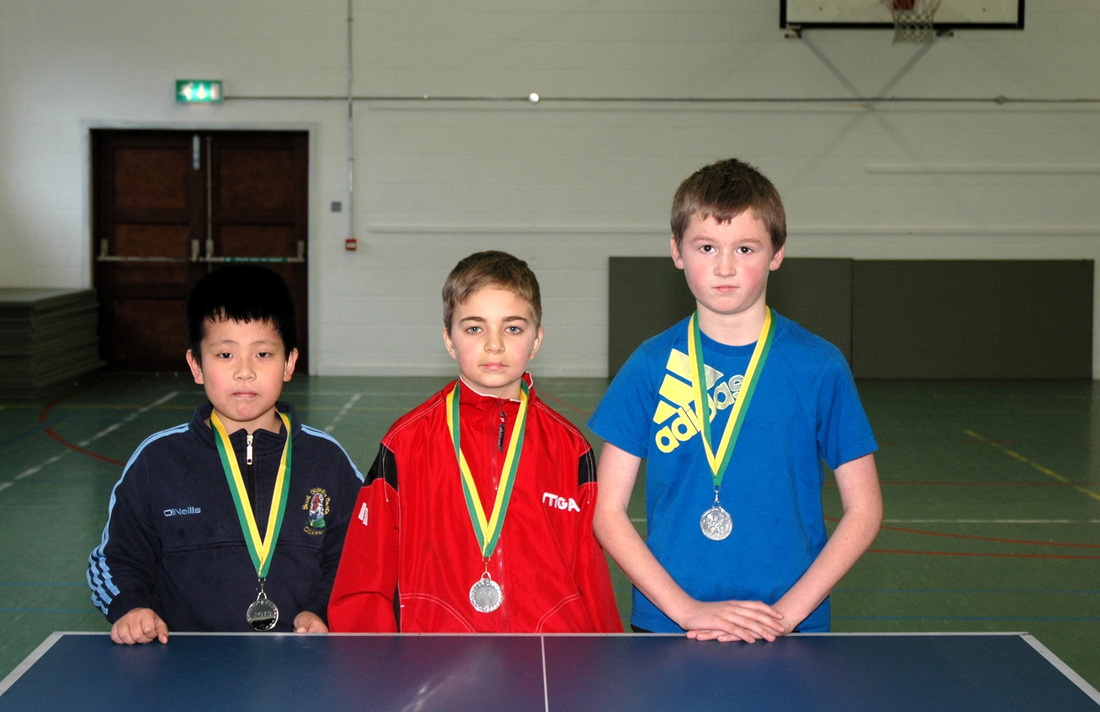 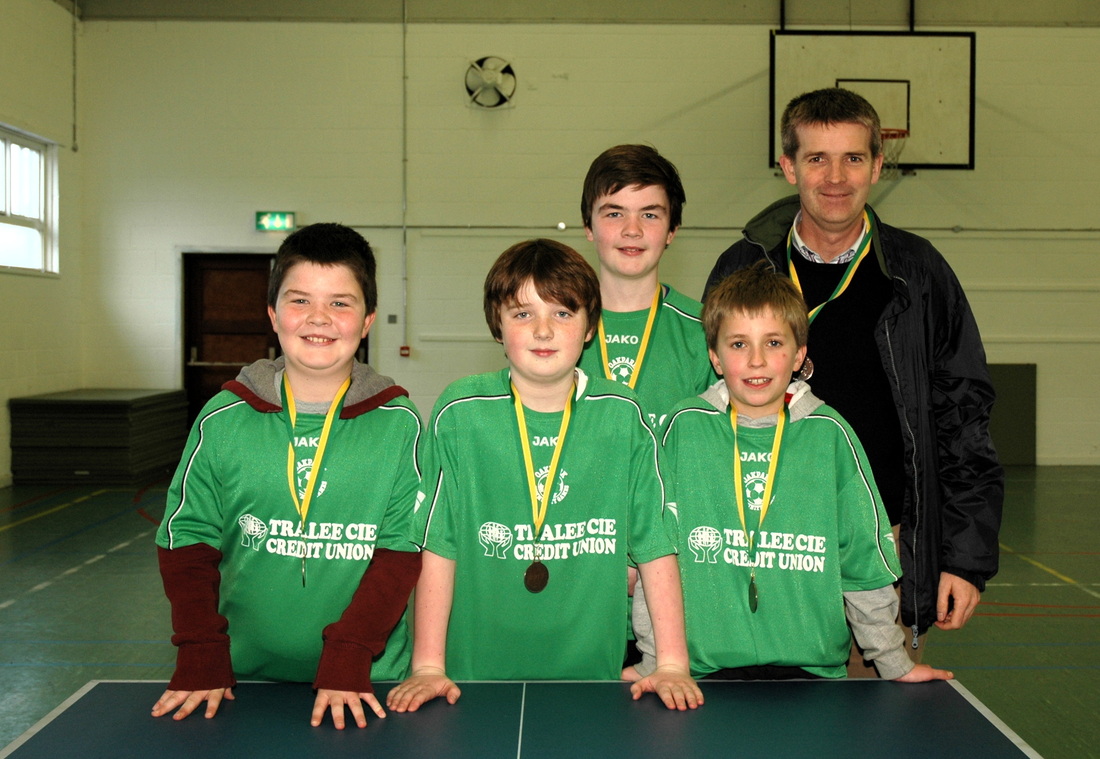 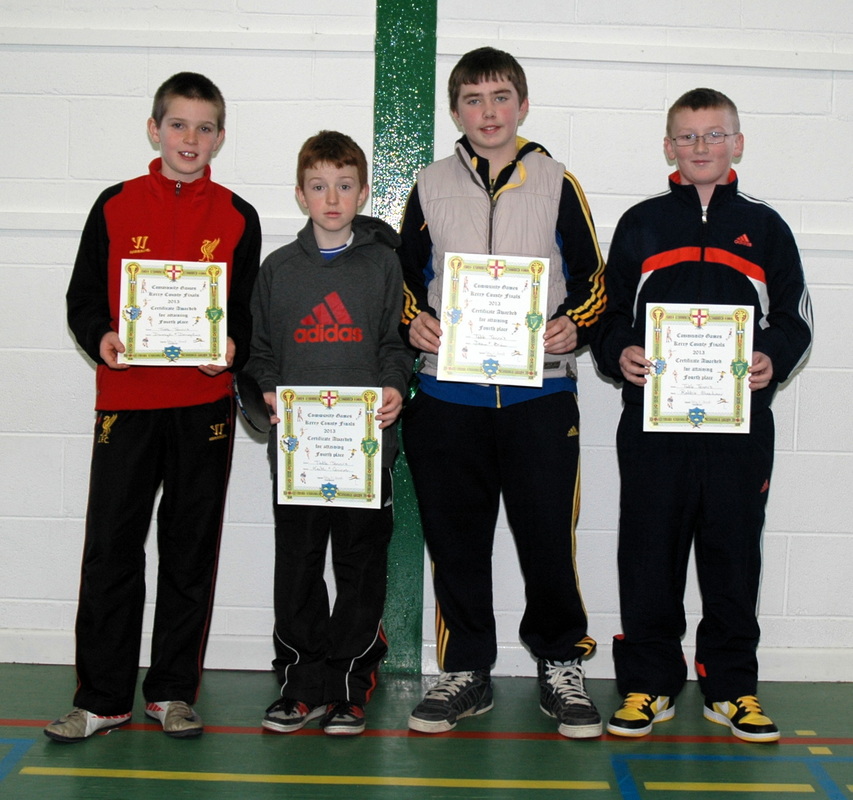 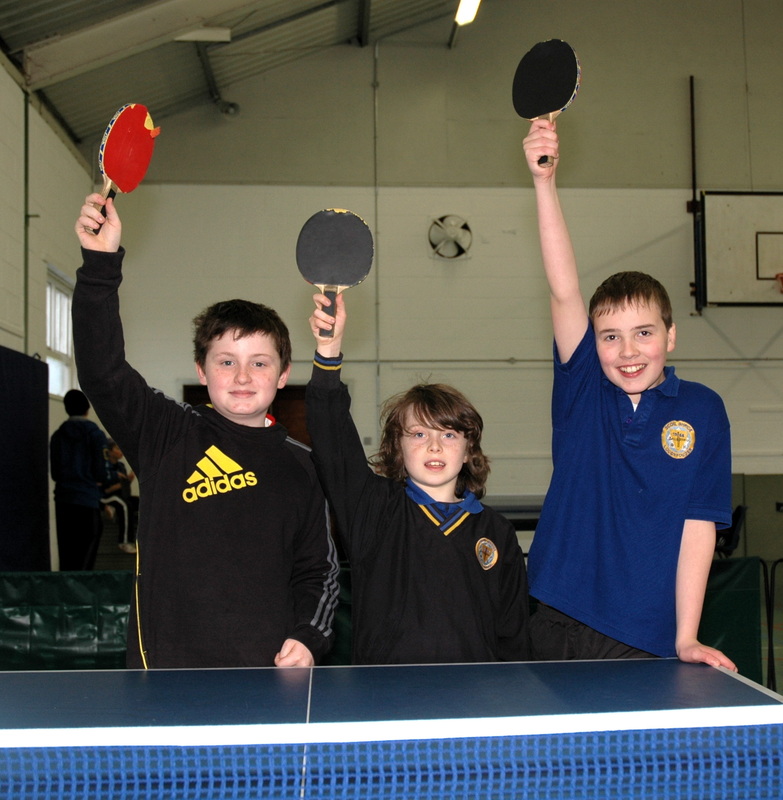 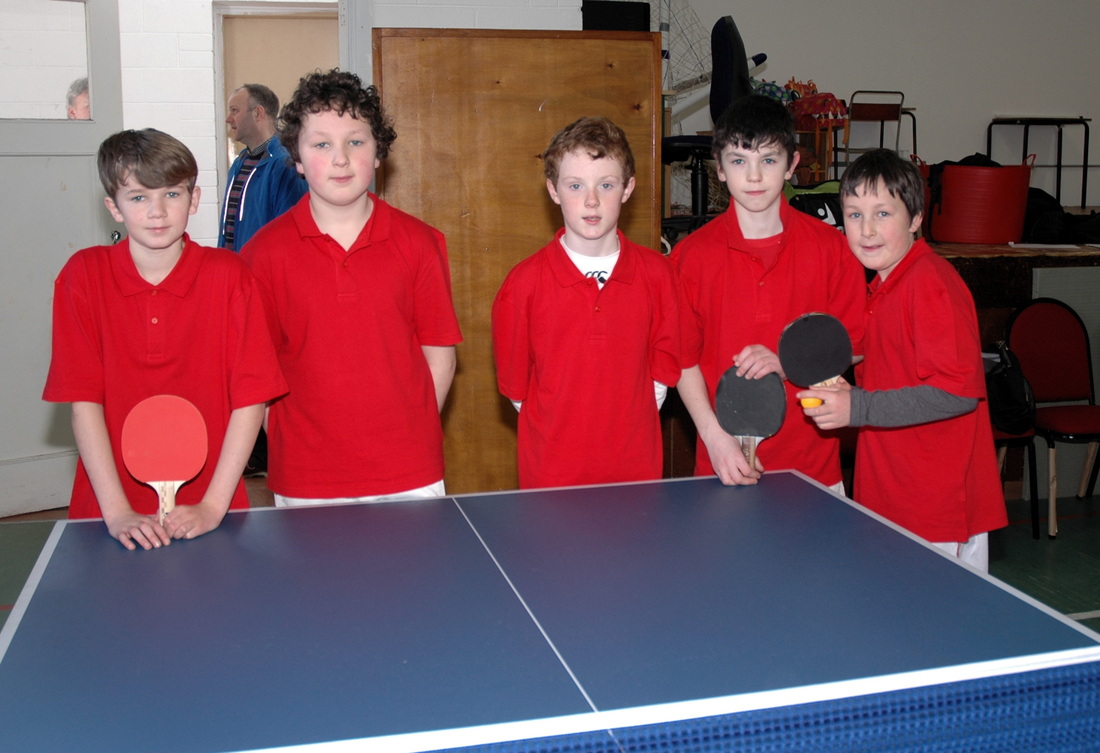 The boys from Blennerville/Ballyard who were knocked out after the Pool stages. (Fergal O'Brien, Ian McCarthy, Niall McCarthy, Brian Teahan, Cathal Fitzgibbon).