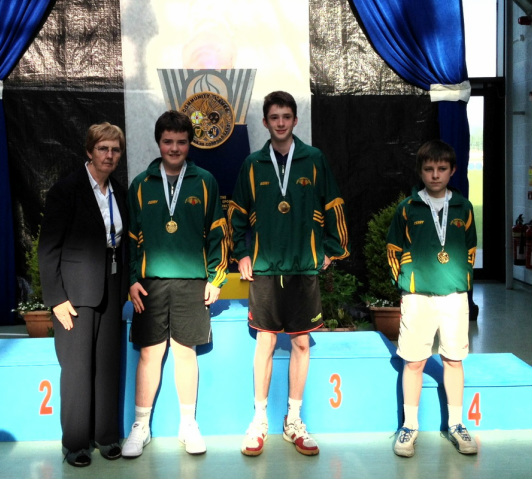 Alan, Stephen and Darren with Margaret Culloty, Director, Community Games
The team from Rock Street/Caherslee are Under-16 National Community Games Champions following a great performance at the National Finals in Athlone over the weekend of 26th-27th May.
On Saturday afternoon they had a tough match against an excellent Monaghan team but great performances by all three players on the team earned them a 4-2 win to put them in the final.
The following day they were up against tough opposition from Ballyfermot, representing Leinster, who had beaten Kilmovee from Mayo in their semi-final on Saturday.

Darren Chester was first up for Rock St./Caherslee and went a game up before losing a tight match to leave the lads 1-0 down. Up stepped Stephen Browne who played superbly to beat the Ballyfermot number one, showing his nerve when he was several points down in the first set. A straight sets win left the score at 1-1.

Not to be outdone, Darren was up again, and played some of his best table tennis to win the match for Rock St./Caherslee. It was a great performance coming so soon after the disappointment of coming so close in the first match and he held himself together well under pressure.

Alan Hobbart was next on the table, having watched his two team mates battle hard to build up the early lead. He made his straight sets win look easy, despite the calibre of his opponent, and everyone knew it would be great to have him anchoring the team if it went down to the wire!

However, it wasn't needed as Stephen came back to the table, confident after his first match, and played brilliantly to win the match 4-1 for Rock St./Caherslee, taking the All-Ireland title and winning Gold Medals and the trophy, which the boys are already fighting over!

Well done to everyone, and congratulations from all in Tralee Table Tennis Club. It couldn't have been done without their support crew of Caitriona, Sheila, & Bridget! 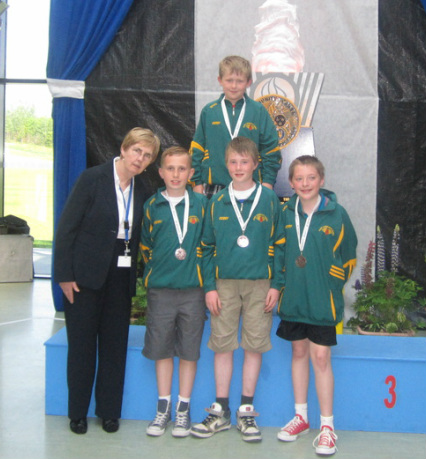 Donagh, Kevin, Darragh and Padraic after receiving their medals from Margaret Culloty.
There was more success for Rock St./Caherslee in the younger (under-13) age group. Transported and supported by Mary, Ger, Bridget and Edel, the boys won bronze medals by beating Kildare in the third-fourth playoff on Sunday.

They had been unlucky to come up against an in-form Monaghan team in the Semi-FInals on Saturday morning, and went down despite a valiant performance. Even their ever-present club mascot (Paul Browne!) was not enough to win the match for them!

On Sunday morning, solid singles wins for Darragh Boyd, Kevin Browne and Donagh McMahon meant that the match was all over after four matches but super-sub Padraic Linnane was not to be denied the chance to show his talents and partnered Darragh in the last Doubles match, winning easily. Well done lads, and remember these will all be in the same age group next year! The Under-16 category has been discontinued for some reason, but with strong teams from Rock St./Caherslee and St. Brendan's/Oakpark there is a good chance of a Tralee representation from Munster again in 2013.


But Rock Street/Caherslee were not the only National Champions from Kerry at the weekend, with the Girls U-16 team from Killarney South beating Deansrath from Dublin in a very hard fought final, Brielle Brady and Valentine Puotkalyte winning in straight sets in the tie-break doubles to bring gold medals home! Clare O'Shea, weary after her two hard singles matches, was an excellent coach for the girls to have at the sideline for their last match, and Killarney's strength was demonstrated by having Devon Brady on the bench, ready to step in if needed! Well done to our friends and nearest neighbours! 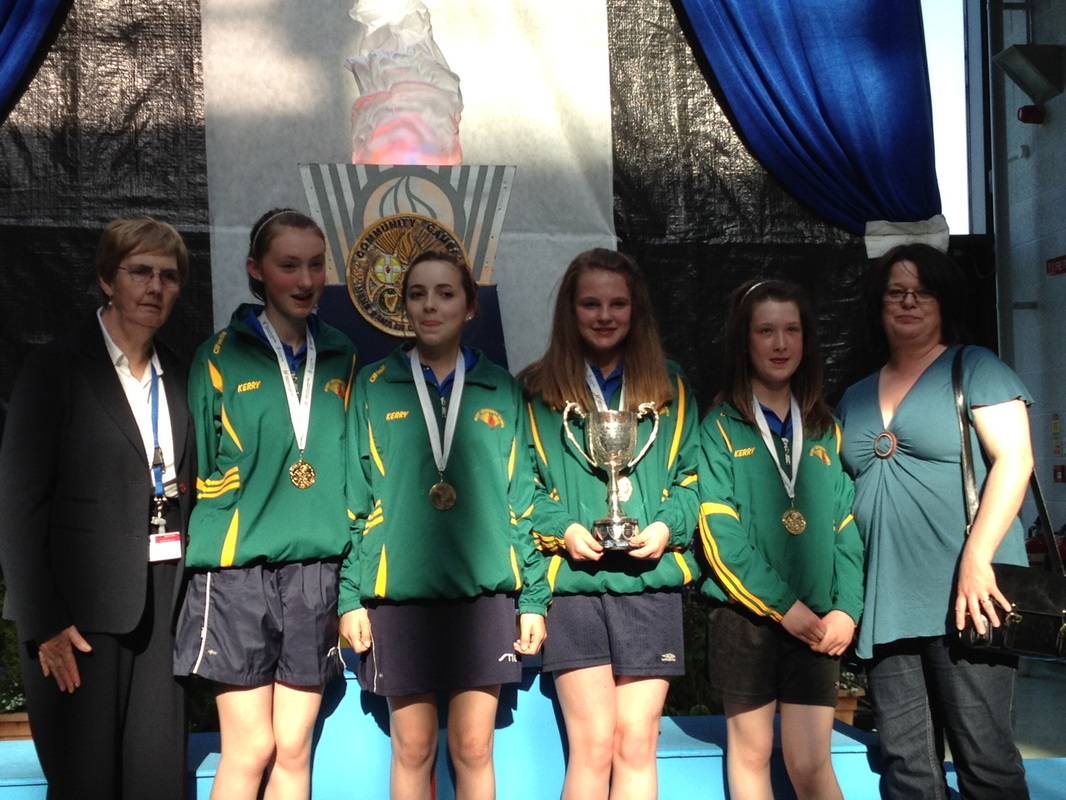 The Killarney U-16 Girls team after winning Gold on 27th May!